There’s a little bit of Fawlty Towers in this place, to be sure. From the fence wire locking out the cutoff switch on the water pump, to the bare wires to make the starter motor kick in on the genset, winches not working on the vehicles (fixed now by us - but incorrectly fitted by the dealer years ago) and the miscellaneous taps melted into the sides of plaster rain tanks, etc, etc. There’s no workshop to take things to here so we make do but somehow though it all seems to work.


We used to joke among ourselves that Ali was a bit like Manuel. Same short of desire to please and bumbling but pleasant style combined with a lack of comprehension of what’s going on around him. Thro win just a pinch of confusion every so often and there you have the recipe.


It used seem like minor but well meaning mishaps followed in his wake and menus were never as predicted. Shirts came back with with holes ironed in them and when Matthias was away our menu got very er, unusual. Potato pizza one day then tuna pasta with a meat sauce the nex. Pancakes one morning would be pancakes as you know it, the next morning they would could best be described as chapatti’s. In fact you never knew what you were going to get for brekky or any other meal really. It was really quite entertaining trying to guess what would turn up next.


I’ve been cooking for myself lately which means a bit of time each day to invent some sort of a meal from whatever ingredients we have in the trunks or whatever fresh foods turn up for sale at the gates at random. but it’s nice to have more control over my nutrition. I cook over an MSR Dragonfly, a multi-fuel stove that burns petrol, diesel, kerosene, Jet A1, white spirit or just about anything really. Very handy in this part of the world. Right now I’m using petrol as it was the first fuel to hand and it does a great job. The only other option for cooking here is a fire which hardly seems worth it when I’m just cooking for me, not to mention being a nuisance if all you want is a cuppa.


Fending for myself now that the cooks have left, has exposed a few more minor but amusing Fawlty Towers type issues. Years of meals being prepared over open fires here means that the miscellaneous collection of pots and pans still remaining have had their handles long since burned or melted away. Not for the first time my Leatherman is coming in handy as a billy lifter. Ditto the camping knife has come in handy. There seems to have been only one knife left here for cutting veggies etc and the security guys are using it. Probably a bit of overkill to be chopping cabbage for dinner with a serrated edged 4” Spyderco Endura but what the heck – it’s not the first time and probably won’t be the last.


I got another good laugh yesterday. We have a gas powered chest freezer half full of the remains of a cow. The previous time the guys bought a cow, they organized for it to be butchered and chopped up to freeze it. Well, they got the cow back chopped it up alright – into six pieces. So this time, we thought we’d ask for it to be butchered properly into small pieces of about 2 kg’s each so that we could just take steaks, chops or bones as we needed from the freezer. Pretty clear you’d think? No. Not so.


Yesterday I went to the freezer for the first time to get a piece out for dinner. I picked what looked to have the least bone and hence best chance of a steak. When it had actually thawed out that afternoon, I had to laugh. It looked like they’d simply taken a panga (machete) to it. Bits of bone, flesh and gristle just panga’d into a piece that would fit into a plastic bag. The rest of the freezer looks to be more full of bone than anything else and certainly no T-Bones or sirloin. Yet another lesson in not taking things for granted I guess… AWA (Africa Wins Again)


I ended up trimming enough bits to make stirfry last night but this morning I went in search of a recipe for beef soup using minimal seasoning (as I just don’t have much to choose from – soy sauce, pepper, garlic, chili sauce is about it). As I write this I have a beef soup simmering on the stove.


But if you could see the view from my kitchen bench and dining room, you’d have to agree it is a pretty nice place to stand and stir a spoon around in pot… 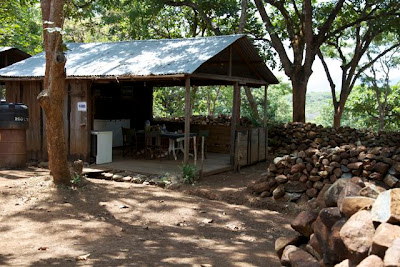