I drove the President today...

Wheels spinning, engine racing - we’ve stopped sliding backwards but that’s not a good thing. The VX has gotten crossed up in the ruts and now we’re sliding sideways down the steep and muddy hillside. “Not good, not good” I’m thinking, as the top heavy, 2 tonne vehicle hooks a wheel in another deep hole. It half bounces, half slides out of it but we’re still sliding, sliding, sliding…

Earlier that day, I’d been driving the President of Tanzania in glorious sunshine. We were still bouncing through the ruts on a tiny track but were travelling forwards at the time (as one should by rights be doing). In the rear view mirror he could be seen sitting in statesmanlike grandeur in the back of the VX Landcruiser. The rest of us in the car form his close personal protection (CPP) team of bodyguards. He’s in the back seat flanked by two burly security officers, with a mzungu security professional driving and the security team leader in the passenger seat.

At least that’s the impression we give for about 3 seconds before we burst into laughter again. In fact, the man in the back is Valerian, our senior technician. Our VX is identical to the Tanzanian Presidents vehicle and some kids along the track call out jokingly “The Presidents car”. Valerian translates the joke for me and looking in the mirror I see him wedged between two burly security guards so I come back with “then that would make you Mr President…”. Immediately the five of us puff out chests out to look suitably professional before we burst out laughing after a few seconds. For those few seconds we could have been mistaken us for a Presidential party but right now we look like a load of giggling loons.

We don’t normally travel with a phalanx of security guards. The place isn’t so dangerous that we need CPP team with us. It just happens that we’re transporting our three security guards to Mwese so that they can catch a bus home. They’ve been at camp for about 4 months now and keen to see their families, not to mention to see a change of scenery. The Mzungus and field crews get out and about regularly but the security team spend 99% of their time in camp so the place must feel like Groundhog Day for them. Even the three day bus ride to Mwanza will make for a welcome change.

We’re making good time on the drive today. The rains have softened the roads and made the ride smoother so sections of the road can be travelled at speed. There are boggy bits and potholes that would swallow a wilderbeest where we have to drop back to walking speed but on the good sections we rocket along at up to 70km/h.

Coming in to Mwese in mid afternoon it looks about as busy as it ever does. That is to say not at all. Mwese is a collection of about 100 huts and houses. Its heyday was in the late 90’s when there were about 10,000 Rwandan refugees living there. Now there are only about 11 Rwandan families left with about 1,000 Bantu locals in the area. We’ve nicknamed the random gathering of mudbrick buildings that constitute the town centre ‘Wall Street’. Just behind Wall Street is the central market comprising courtyard of wooden tables and some small shops. 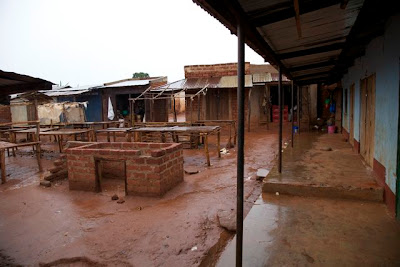 The bus from Mwese to Mpanda takes 12 hours to do what we would normally drive in three hours so it leaves first thing each morning and hence the lucky lads get to spend a night in town. We buy some bus tickets on Wall Street then go looking for accommodation for the guys. The first place we try is full - go figure, must be a convention in town? In the end we find a place which is 400m from wall street. I might add, that I’ve discovered there are at least 3 guesthouses, 3 restaurants, a pharmacy and 2 pubs in Mwese. (I’m using these terms in their broadest possible sense you understand.) None of them would I ever have picked from the outside as being what they turn out to be. The buildings are mudbrick (with a tin roof if the owner is wealthy) and have no signs to identify what they are. It’s all based on local knowledge. And I guess, why not when you’re at the end of the bus line and there is next to zip non-local traffic. At the same time, you have to wonder how a guesthouse makes a living if only the locals know it’s a guesthouse?  The only markings on this one suggested a hairdresser. 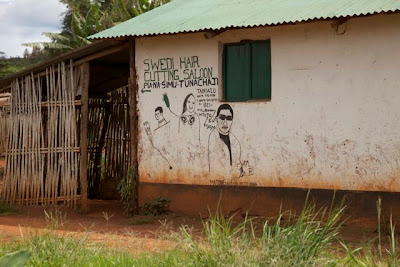