Been back in Africa since the beginning of May and it's good to be back in the warmth. Always a pleasantly disorienting experience to go from a wintery but orderly place like the US, to the heat and chaos of Africa. Must be something about me that likes the chaos over order.

That being said, I'm not a fan of dusty Dar Es Salaam, the chief port and former capital of Tanzania. Its Arabic name means “haven of peace” but it would have to be a candidate for 'most inappropriately named city in the world'.  Despite a population estimated at a 'mere' 1.4 million people, the traffic congestion is on a par with a city of 20 million. To be fair, the complete lack of maintenance and anything approximating a motorway, contributes to this but each individual driver seems relentlessly committed to creating their own mini-gridlock (and their own mini trail of mayhem). Dar and the countries roads in general, would be worth a dedicated blog entry, but that's for another day.

Meanwhile, other than the three weeks in Dar buying supplies, and five days convoy drive out to camp, we spend most of our time out bush and it's a great place to be.  The first few weeks were spent repairing wet season damage, rewiring the electrical systems at camp, conducting driver training (a mission in itself - perhaps another blog, one day...), inventorying what remained from some wet season mayhem and generally getting set up to go exploring. 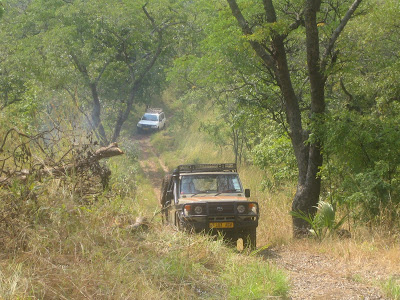 Along the way we rebuilt a few tracks, parted way with a few wayward staff, been bogged/de-bogged/re-bogged and generally managed to pass hours, days and weeks in a blur of activity. 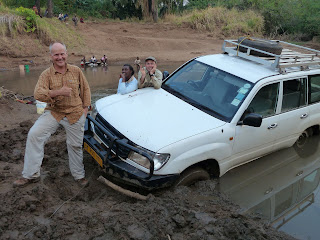 We've even had a yippie-shoot delivering weapons refresher training to the security staff, which is a great excuse to go out and make loud but otherwise pointless noises and accompanying holes in tin-cans. 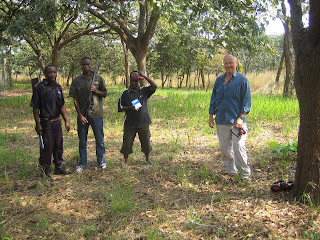 Not that we needed them that day (in hindsight, perhaps as much good luck, as anything else) but medical facilities out here are few and far between. We operate the best stocked first aid clinic in the area and provide free treatment or free transport to the nearest hospital for the local communities. It's only a drop in the ocean but at least it's something. 90+% of our treatments fit into one of four categories so we don't actually need to keep that much stuff in stock. It's almost always one or more of the following:
Four of us have basic to advanced first aid and medical skills, but when in doubt, our 'bible' out here is "Where There Is No Doctor", a handbook for village medical care in remote locations. And when all else fails, a lift to the nearest hospital (a days drive away) is the next option. Local medical clinics (a mere day's walk away in either direction) are so poorly equipped that typhoid patients often sit in corridors on concrete or dirt floors waiting for IV solutions that simply aren't available. We regularly end up donating medical supplies to typhoid or malaria sufferers. It's a fine line of course, as we won't be here forever so we walk the line of supporting, not supplanting their medical care. 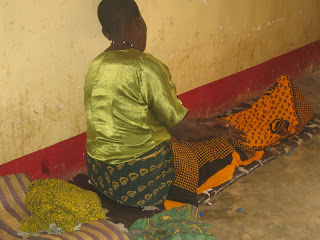 We've been conducing actual exploration and collecting soil samples now from far and wide for about a month (which is after all the reason we're here) but along the way, we've been riding dirtbikes and mountain bikes, hiking and four-wheel-driving all in the cause.  The dirtbikes and mountain bikes actually have a business use - many of our geological targets are only accessible via bicycle trails. To really get in and sample an area, we need to build 4WD tracks and set up a flycamp in the area for a few weeks. Figuring out which bicycle tracks can be converted to a 4WD track (and indeed whether or not the prospective area is er, worth prospecting) means we need to get in to have a look.  Hence, we've finally figured out a way to be paid to ride enduro bikes and mountain bikes - without having to actually be good enough to turn pro. 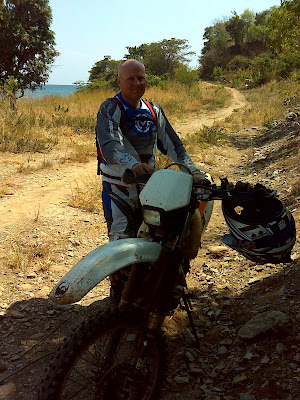 We've done a couple of mammoth trips lately to open up areas including an overnight 4WD camp that needed mountain bikes to get us into the target area the next day. A great excuse for Lynne, Pete and I to go camping in lion and elephant country. OK, perhaps I exaggerate... (so what's new). We didn't see any lions, rhino's or elephants at all and never came closer than 10km to Mahale National Park boundary where the animals allegedly reside. 'Twas still great fun camping in a bamboo thicket by the river then mountain biking the next day.   Pete and I have also done a couple of day long dirtbike rides down some of the gnarliest trails we've ridden for a long, long time. Bouncing over logs on the edge of precipices and hauling them, wheels spinning through boot-sucking mud creeks probably doesn't sound like fun to most people... But it does to us :-)

Don't tell the boss, but despite the crazy times, remote supply lines and sometimes near overwhelming frustrations, I still can't quite believe I'm getting paid to do this stuff...
Posted by Unknown at 6:48 AM