Busy times by the lake…

I’ve been a tad remiss in blog updates lately so (much like the main character in the film Memento) the blog is missing bits of history and being written like a series of short adventures, not necessarily in chronological order. But hey, that’s how my memory works anyway.    My tardiness is due to a mixture of work, fun, friends visiting and adventures being had, but after the Serengeti trip then a few big weeks back in camp I’ve found time to scratch myself again - and even to blog a bit.

Meanwhile... Life is going well here in Tanzania. I’m still feeling like I’m herding cats some days but also still living in a ‘boys own adventure’ novel. Lynne is out here now along with a couple of Aussie mates from Cambodia and a team of consulting geos so it’s all very social.  Rob & Stu (my mates) are out here to do some metal detecting, gold prospecting and general adventuring.  They’ve been out digging up rusty nails left and right but no nuggets yet. There’s definitely lots of gold around though and a couple of areas out here are unknown to the big companies but teeming with artisanal miners. We visited a local prospector/miner who has been raking it in for about seven years. He showed us his mine (complete with 20m shaft, ball mill & sluice) and a few ounces of his gold so we’ve seen lots of gold already (albeit sadly not ours lol). 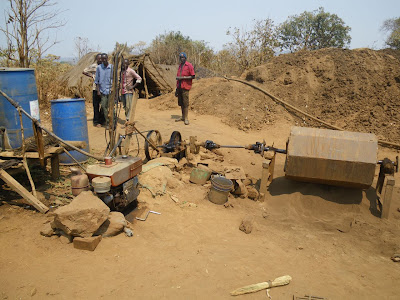 In the spirit of getting paid to play and the excuse of providing an area induction for a new geologist, we went down to Mgombazi on Lake Tanganyika one Sunday not so long ago. Lynne cycled down while most of the crew travelled by Landcruiser. I took the XR400 which was an absolutely brilliant way to spend an afternoon. Rob, a very experienced offroad driver, came back with the biggest grin after driving there and back, saying “now I can see why you like it here so much”…   It’s only 25km but it’s a rough old track which takes 90 mins in a 4WD - or 30 mins on the XR - and all the local guys seemed to think it was too far for a mzungu - especially a mzungu woman! – but Lynne loved the trip down and had a blast despite nearly coming a cropper on a rocky downhill section. With no protection other than a t-shirt and shorts, it would have been a long trip to A&E.

As for Lake Tanganyika - It’s bloody enormous! Longest lake in the world, second deepest and largest by volume of water. Basically you’d be better off thinking of it as a freshwater ocean than a lake and it generates its own weather.  The trip turned out to be a great day out, not least of all because we found a bulldozer parked down there which had just cut a new road from Kigoma, the biggest port on the lake and a relative metropolis.

Our Sunday trip and conversations with the locals inspired us to see if the road was actually drivable so the following Friday we set off back down to Mgombazi but kept going north to Kigoma.  It’s election year here so a bulldozer has been busy upgrading what used to be a bicycle path for most of its length into a dirt road.  It used to take 5 days walk but is now 5 hours drive and it traverses an amazingly beautiful bit of decent coastal track. 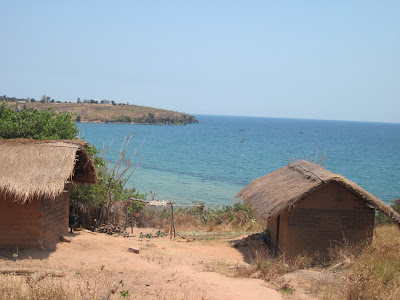 We were lucky enough to pull into one village on a hill with perfect timing just as the ferry, a former WW1 German destroyer called MV Liembe was picking up passengers in a bay. A unique boat and quite spectacular - you’ll have seen it if you’ve seen the boat that played the German destroyer in ‘African Queen’. 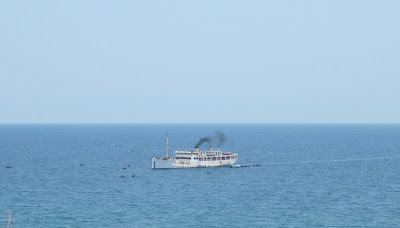 Another ferry that we found along the way which was less appealing but had to use was the MV Iladala – a floating wreck of a river ferry on the one major river crossing. It was hard to believe it was only 5 years old but the official plaque of commissioning by a local dignitary was dated 2005.  As usual, we had to wait for it to zig-zag it’s way across the river to pick us up then for the ragtag crew to position some logs in place of where they had torn off the tip of the loading ramp.  The logs weren’t even necessary for us in the Landcruiser but still we had to wait for them to faff around. When the engine started we realised why it zig-zagged across the river… The engine on one side had failed so they navigated by using a mixture of forward and reverse movement on one side.  It seemed like the crew had long since become used to this as standard operating practice but even so the landings at each side were hardly a magnificent feat of seamanship. 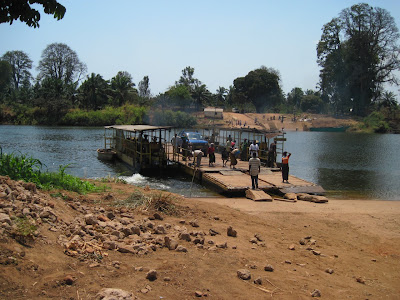 After a bit of a navigation exercise for the last bit we got into Kigoma and checked out a couple of mzungu hotels which were pretty boring but have now found our favourite accommodation in Tanzania. A guest house with private cottage and camping sites with two private beaches on the crystal clear waters of Lake Tanganyika. We BBQ’d a sunset dinner with cold beer on an huge deck on the hill overlooking a pristine ocean (aka Lake Tanganyika) watching the fishing boats coming out to dot lights across the horizon.   All this for $15/person. Beats the $100/night at the mzungu hotels hands down! 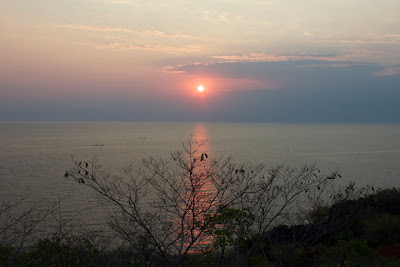 The next morning after a late start caused by a lingering brekky on the same deck, we spent a few hours shopping (always an experience of ‘no hurry in Africa’) then drove back to Mibango.  The trip with 5 hours of great scenery sure beats the 7 hours drive over bone jarring roads to dusty old Mpanda, which used to be our main supply town (until we discovered this new road to Kigoma). Bonus that there are also commercial flights from Dar so it has potential to cut our travel costs dramatically – at least so we thought that day.

The road was so good in fact that it looked like we would have a new supply town and easy access to flights to Dar Es Salaam.  But nothing is that easy in Africa...  We had to drive back to Kigoma 6 days later to pick up a technician and equipment that had missed a charter flight only to find that a tiny amount of rain down the track had washed away some of the creek crossings. 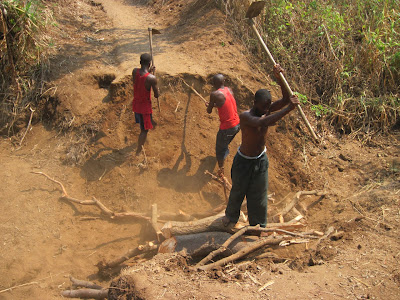 We managed to 4WD around 3 massive washaways (just) but had to dig/build/adapt 5 of them including 2 that would have been big enough to swallow the landcruiser, never to be seen again. Luckily there’s always abundant affordable labour at hand but even so two of the washaways took half a dozen of us about 40 minutes eahc to refill with logs and loose dirt enough to make for some interesting 4WD'ing.
If you'd like to see what I mean by interesting 4WD'ing, have a look at this link.

In the end although it was great to get to Kigoma again and to swim in the waters of Lake Tanganyika, I foresee that was our last trip this year.
Posted by Unknown at 2:39 PM